For his encore at Madison Square Garden on Sunday night, Eric Clapton reconvened all four of the guitarists he had brought on as guests in the show for a climactic tear through “High Time We Went,” the Joe Cocker song. Their solos ran down the line, brief but full of distinguishing traits: shapely but biting for Doyle Bramhall II; ecstatic but measured for John Mayer; flinty and raw for Jimmie Vaughan; fluid and singing for Derek Trucks.

But there was no solo by Mr. Clapton, who stood off to one side with a Fender Stratocaster, facing the others at times like an encouraging scout leader. He radiated satisfaction and security, basking in the warmth of a guitar-centric brotherhood and his exalted place in it. Why spoil all that with his own exertion? Doesn’t a gracious host let others do most of the talking, even as he takes his seat at the head of the table?

Mr. Clapton had a commemorative hook for this show, and for an all-but-identically plotted one in the same arena on Friday. He turned 70 in late March; these were his only tour dates before a series of concerts in the coming weeks at the Royal Albert Hall in London. “Thank you for coming out and helping me to celebrate this wonderful birthday,” he said at the top of the encore, in the evening’s single nod to the occasion.

By all other measures, notwithstanding the guests, the show was business as usual for Mr. Clapton, whose mature performance style has always suggested a master clinician more than a showman. His band is stocked with longtime associates who excel at laying firm bedrock, like the bassist Nathan East and the drummer Steve Gadd.

A pair of background singers, Michelle John and Sharon White, bolstered Mr. Clapton’s choruses, while Chris Stainton fleshed out the band’s sound on piano. Paul Carrack did some stirring work on organ, and he took a soulful vocal lead on a couple of songs, “High Time We Went” and another Cocker staple, “You Are So Beautiful.” (Mr. East stepped out front, too, taking Steve Winwood’s lead vocal on the Blind Faith song “Can’t Find My Way Home.”)

Mr. Clapton drafted his set list as a pledge of allegiance: His own songs formed a minority amid covers of his blues totems, including Bo Diddley, Johnny Moore, Willie Dixon and Muddy Waters. But because Mr. Clapton has been traveling this road so long, those borrowed blues also qualify as beloved fixtures of his catalog.

Two of his best moments came on a pair of Robert Johnson tunes he has memorably recorded: “Crossroads,” with winningly gruff singing and a stomping cadence; and “Little Queen of Spades,” with lapidary guitar interjections over a slow, circuitous triplet beat.

Elsewhere, Mr. Clapton took what felt like a dutiful tour through his hit parade, blazing through Bob Marley and the Wailers’ “I Shot the Sheriff” and bringing a more unfortunate lite-reggae lilt to his ballad “Tears in Heaven.” He played “Layla” in an arrangement similar to the one on his 1992 album “Unplugged,” but with a more unpredictable and expressive acoustic guitar solo. “Wonderful Tonight” was warmed-over treacle, and an inconvenient reminder of the constriction that age has imposed on Mr. Clapton’s voice.

Predictably, given his recorded history and his more recent stewardship of the Crossroads Guitar Festival, Mr. Clapton perked up every time he had another guitar player onstage. Mr. Mayer brought a respectfully assertive presence to “Pretending,” and Mr. Vaughan — Stevie Ray Vaughan’s older brother, and at 64, essentially Mr. Clapton’s peer — was workmanlike but likably punchy on “Before You Accuse Me.”

Even better was a version of “Let It Rain,” from Mr. Clapton’s self-titled 1970 studio debut, featuring Mr. Bramhall and Mr. Trucks. Both guitarists have toured in Mr. Clapton’s bands, and their easy familiarity was an evident asset. Mr. Trucks especially, without his customary slide, worked up to an incantatory outflow. And this time, Mr. Clapton joined the fray: unpressured and unhurried, but compelling all the same.

Eric  and Robert Plant have joined the lineup of a star-studded tribute concert in honor of renowned U.K. folk guitarist Bert Jansch that will take place at London’s Royal Festival Hall on Dec. 3..  The show will feature various artists playing songs written, performed or inspired by Jansch, who died in October 2011 at age 67 after a battle with lung cancer.

Other artists scheduled to appear at the show include Donovan, one-time Pink Floyd collaborator Roy Harper and most of the surviving members of Jansch’s jazz-folk supergroup Pentangle.

You enter ‘CD Buttek beim Palais’ (CD store close to Grand Ducal Palace) and you feel the vibes. This store is a temple for music affiniciados and the religion is Rock n’ Roll.  The place is packed with Vinyls, CDs, DVDs, flyers, t-shirts etc. bearing the image of yesterday’s and today’s icons and competes for a clientele that is spread over several generations.  Narrow corridors spread over two levels are providing access to thousands of music supports covering all styles from rock and pop over blues and jazz to classical and world music.

The owner, Pierre Delhalt, is a historic character in the local record business and a real music-Wiki.

I do know Pierre since I started buying music, vinyls of course… some 40 years ago (shit). To this day I refuse to estimate the amount of cash I left between these walls and Pierre advised me also not do so in the future. There were countless record shops at that time, in the 70s, 80s and early 90s, then digitalization made them disappear. But some enthusiasts resist and persist. And exactly this makes the difference. The enthusiasm, the knowledge, the counsel and the service form an entity that download platforms and online stores never can provide.

The magical in this place is this smell of Rock n’ Roll I know and recognize since decades. And when I hunker over thousands of  booklets and covers to dig and grub between The Beatles, Eric Clapton, Jeff Beck, The Rolling Stones, Led Zeppelin, Wishbone Ash and other heroes of yesteryear, time has no value to me and the moment is right perfect.

So, next time you visit Luxembourg City; do not miss to pay a visit to this bastion.

In the liner notes to his brand-new DVD, Live Kisses (another brand-new, November release), McCartney reveals that he plays bass on Eric's upcoming studio album. It's not just any bass; it's the standup bass that once belonged to Elvis Presley's bassist, Bill Black. McCartney has owned the bass since the '70s; it was a gift from his late wife, Linda. This is basically McCartney repaying a favor to Eric, who played guitar (of course) on two Kisses on the Bottom tracks. 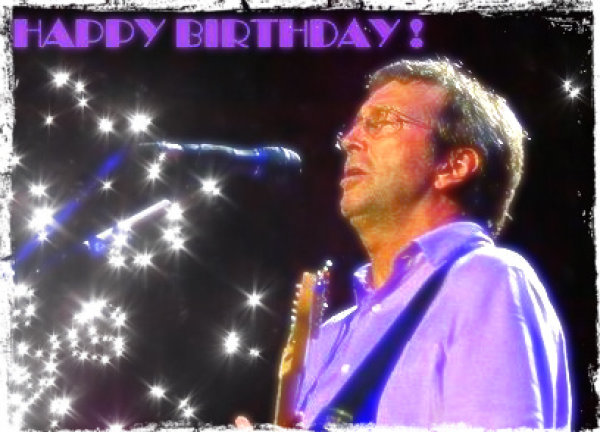 Presently, Eric's 2011 Japan Tour is under way. Watch out for updates in the setlist section. 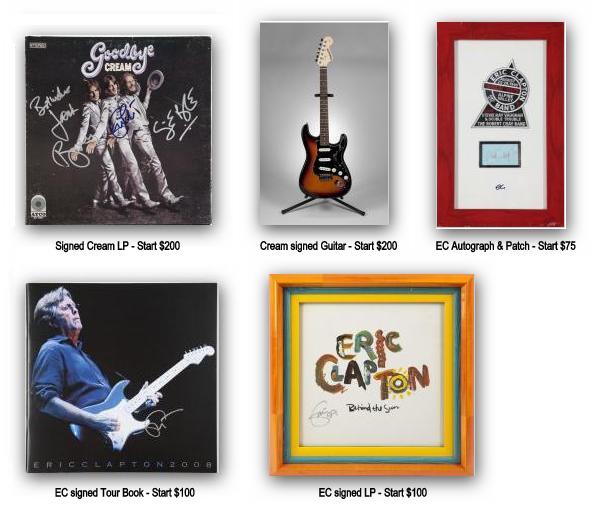 Watch out for setlist up-dates in the related section, as South America Tour starts today.

LOS ANGELES—Musician Eric Clapton announced Wednesday that his next album, Eric Clapton Plays The Blues, would be a collection of songs primarily influenced by blues music, a genre the 66-year-old guitarist said he enjoys very much. "I've always been interested in blues music, and this album will really explore that interest," Clapton told reporters, explaining that many of the new songs would feature long blues guitar solos, repeating 12-bar-blues chord structures, and lyrical themes centered around both getting and continuing to have the blues. "I'm fairly confident about the project, as I plan to sing with a sort of forlorn, bluesy quality in my voice, and I'll be playing a lot of E, A, and B chords, along with all the blue notes of the scale. Just pure and simple blues, really." Clapton later admitted that while each track would definitely be inspired by blues music, the final product might actually be more of a blues-rock album.

Yes, just what your wallets needed to hear, an Eric Clapton box set of blues is scheduled to be released in November by Warners.

We have no more details yet as to number of discs and content. Rest assured as soon as we do we will post the details.

Looks like it will be a bumper year end for lovers of box sets!